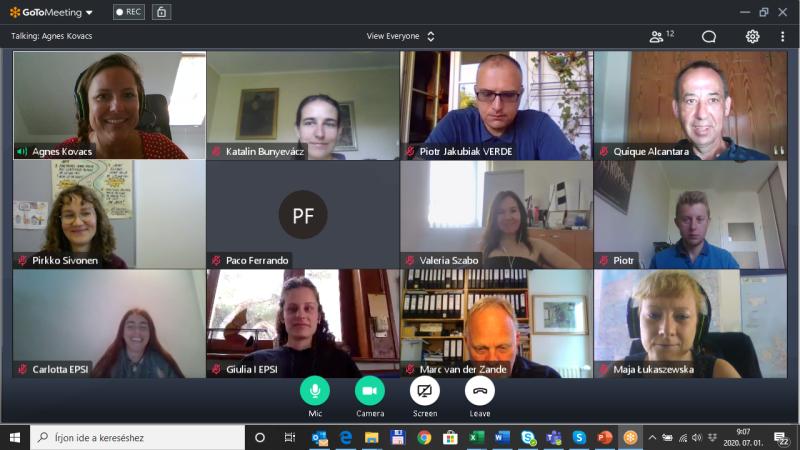 The first GG was myHYDRO presented by Magdalena Owczarek and Ewelina Pabjańczyk-Wlazło. This StartUp highlights the importance of monitoring hydration of humans and particularly of those who have an active lifestyle. MyHYDRO offers an innovative textile wristband which monitors the level of hydration of the individual, as well as some main vital measurements through innovative sensors technology. Hence, myHYDRO provides an universal, innovative and non-invasive tool to ensure a continuous monitoring of the physical well-being.

Also, Swim for A Dream has been presented as a GG by Adam Jerzykowski. Swim for a Dream started with the launch of an event named Dreamers Day so to set a new Guinness World whilst also hosting 20+ other sport activities. The aim was to raise awareness of the drawbacks of sedentary lifestyle causing rising obesity among youngsters, particularly. Hence, the Dreamers Day in 2017 conquer the new record of the World Guinness Record whereas in 2018 its strategic cooperation with VERDE has lead to the organisation a conference about the status of sports and physical activity in Lodz during the Dreamers Day.

The third GG focused on the Technical University of Lodz and its R&D towards sports and vitality. This was presented by Grzegorz Liskiewicz who highlighted the increasing commitment of the University to boost sport and vitality both in terms of awareness among its community, as well as in terms of new and innovative academic courses. This is also reflected in Lodz hosting the European Universities Games in 2022 which aim to lay the foundation to lasting legacies for sport and vitality in the region.

Good Practices in VERDE’s Regional Status of Affairs
Lodzkie Horse Trail is an initiative launched in 2012 by the Managing Authority of Lodz under a Private/Public Partnership including+200 horse clubs. This initiative aimed at developing an Horse Trail covering +180km across the whole region of Lodz so to lift tourist activities in the rural districts whilst also valorising the unique natural wealth available. Hence, the key lesson learnt from Lodzkie Horse Trail includes the boosting of sport and vitality in rural communities, the promotion of niche sports so to capitalise on the regional natural wealth and the use of innovative technologies.

The second GG named “Orlikowa” Champions League was launched by the Department of Sport and Tourism of the Marshall Office of Lodz in 2009. This project included a juvenile tournament of eight sport disciplines hold on traditional artificial pitches named “Orliki” so to provide appropriate infrastructure in each municipality (at least one pitch per discipline) and to promote sport and vitality among youths. The key lessons learnt from “Orlikowa” Champions League are the impact of the initiative considering the limited resources (100.000 Euros), the use of already existing infrastructures in the districts and the relevance of strategic cooperation with key stakeholders such as sport clubs/association/schools.

Finally, MyFriend was presented as an initiative launched in 2015 by the Department of Education and Sport of the City of Lodz and the Lodz Center for Teacher Training and Practical Education. MyFriend is an initiative to reduce “unjustified” absences from PE classes by promoting a more inclusive grading system which also focus on the commitment/progress of the student. This includes supporting schools and teachers by offering workshops to embrace the new grading system. Hence, the key lesson learnt from MyFriend is its repeatability across different regions/countries.

Workshops :
Partners have joined an e-workshop regarding the GG presented with the intention to reflect and identify – at the partner and consortium levels – the most relevant lessons learnt and their applicability into partners Action Plans. Hence, each partner has presented the most relevant lessons learnt according with their regional needs, as well as highlighting some initial ideas on how effectively and appropriately transfer these practices within their foreseen Action Plans.

Pilot Actions :
Partners hold a session to share ideas for a Common Pilot Actions with the aim being to identify a suitable Action under a relevant topic for the consortium. In merit, it was highlighted the importance to ensure that the Common Pilot Actions advances both the partners Action Plans and the project aim within the context of socio-economic transformations in Europe so to open up new dimensions for the capitalisation of sports ecosystems as a whole.

Next :
The consortium will continue to further advance with their Actions Plans based on the lessons learnt whilst continuing mediating to identify suitable activities/thematic for the Common Pilot Actions.